Confessions of a WM shopper 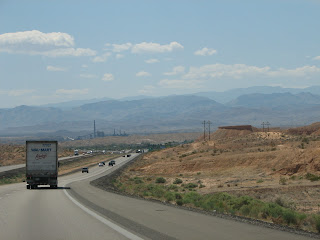 An article written for greenadine website—the mood is still relevant, and the need is ever-present. So here as a first column on the green side of this page...
confessions of a WM shopper.
Before a green wave sweeps my words away from the shores of reality, please allow me some introductory disclaimer here. I do hold some healthy distrust of all things commercial and refute the merits of advertising.
Now i do have a small household to maintain and though i can subsist on micronized economics, not everyone shares my minimalism. So, i shop, rarely, but yes i visit Wal-Mart. Me and the local Amish.
Everywhere i have lived, Wal-Mart has been the closest and cheapest store.Coincidence? hardly! i trust some demographics were at play. So, i take the back roads and slink along the aisles, choose my organic toothpaste, virgin soap and low VOC paint. then move over to the organic vegetables, the whole grain pita, and jar of olives.
Before this turns into an attraction for green shoppers, let's look at Mega mart's supply chain effect. As of Sept. 2007, the retail giant launched their first of many offensives on the Global War-ming front.
Their Great value brand of CFLs compact fluorescent lightbulbs, being a clear objective in the greening spectrum.The management clearly intends to supply sustainable goods at affordable prices.
They have the clout, the means and the connections to do so. Their large clientele will purchase large amounts of these products; which will create a wide ripple effect throughout the economy, and synergistically, the ecology.
Wal-Mart is keeping tabs on suppliers via a scorecard. They are asking for packaging reduction of 5% by 2013. it sounds ridiculously dismal, 50% by end of 2010 would certainly impress me, and produce a healthier impact on the environment. But, the math is more complicated than first appears.
Product to package ratio--space utilization--distance traveled--package transport, all are factors in the computing and recording of figures involved. Further complicating the process of research and fact finding, trade associations and academics must meet and agree with each step and statistical configuration. NGOs and suppliers must validate the accounting and then return it all for speculation by the retailer.
Whatever happened to cow-barn--milk-bottle--truck to store- to basket-and home fridge.. no more waxed cartons, plastic islands and errant paper cups blowing in my yard. No need for long trains to haul tons of detritus out of state. And no more plastic bags needed to haul the single product sans clear plastic shell.
Lee Scott, CEO of Wal-Mart announced his company plans in Jan 08, he means to cash in on the nascent wave of concern over the environmental condition. Not that i ever noticed too much concern on the faces or in the baskets of shoppers.. therefore that's where supply precedes demand--management makes the egg and the chicks will follow--good marketing as usual. perhaps finally aiming in the right direction.
From the top down, emphasis is renewed on ethical sourcing and fair trade, advancing ahead of predicted resource shortages and poor global economy. Out of necessity, the focus is shifting toward energy intensive products and energy efficiency. The whole strategy is concentrating focused effort ahead of foreign oil trade inequities.
Build it and they shall come around, with millions in tow. Turning green consumerism into green cash. It's amazing what the the profit margin can accomplish. Climate Change scientists have tried to steer the affluent polluters toward saner behavior, for years. And now the marketplace is taking over for the last fistful of dollars quick, before it all crumbles. You can breathe now, mega mart will save us from ourselves.

Seagulls dart about the remains of lovers,
the parts only a bird can sense.

Seagulls bicker over warm prints left
in sand, where bodies pushed boundaries
in the pale light of dawn
where soft sweat salted the skin, the mouth
the hands, eager to assume, to consume.

scavenge the tears of one
and the spit of another

And i watch footprints separate
away.

Email ThisBlogThis!Share to TwitterShare to FacebookShare to Pinterest
Labels: POEMS

A Bat , Two Chicks and a White Heron 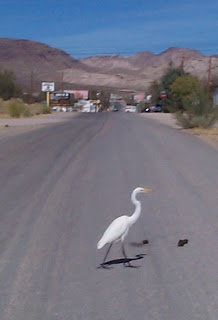 A Bat, Two Chicks and a White Heron...
Evening come, wind at rest, mosquitoes and gnats ready. The one street light flickers on as if the distant bray of wild burros had sent a command. Sweat trickles along the spine to signal time to replenish. I drink from the warm water in a tall mason jar. The springs on the daybed by the cooler signal another life. Fingers gripping jar, i rise slowly. 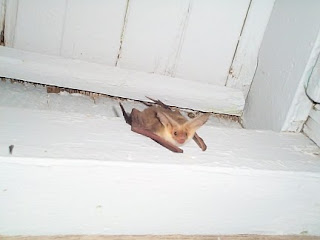 Little brown bat shakes her head, ears flapping, she stretches one arm, then the next in a nearly imperceptible shudder. she yawns and scans the air, and curls back in her head down posture along the boards until darkness calls. i sit further into the recess of the evening, waiting, looking into the vanishing mountain for a change of the guard.
The Desert big horn have spontaneously disappeared from the ridge above. Like cardboard figures being yanked from an Indian backdrop. Hunger pulls the vagus string inside, yet i will not move. Ever changing, ever present, the crepuscular theater unfurls as surround sound and scene. I will the night hawk to show the figure eight mastery of moth catching by the mercury light above. From behind the bean vines i miss not a turn, not a whoosh of wing. I am moth and dark bird, white tip and crooked beak, alone among sleek flying mates. flapping the last dance of a short life.
Amargosa toads erupt out of sand beneath the datura, seeking moisture and insects in the early relief from sun. I am spotted skin and long legs, ready to pounce and feed, to hop and mate by the silent narrow stream below, left over from last year's rain. Egret flies up at dusk and danger past, his belly full of tadpoles caught as captives in an algal puddle. His neck folded, his eye alert in this last effort of day. I see the land beneath his slow wing, unrolling mass of tamarack and olive, drained by the slimy runoff of man's disrespect.
Behind me, the house groans, the springs wince, as i breathe ever shallow breath to stretch the evening out into peace, little bat turns her head my way, takes flight and skillfully turns to the light pole, she circles and designs scrolls against the enveloping blackness beyond. The many little hawks have vacated and bats arrive from the few trees along the ghost banks of the underground river. Some have slid from hot attics in abandoned minor's shacks in the canyon. I am air gliding, whirling, cascading and swooping everything that flies to the attraction of a single light on the edge of the ghost town. The floor hisses behind the door, i swallow the tepid water rolling in my mouth in silent liquid motion.
From midway up the canyon walls, the unmistakable call of a burro threatens intruders on his descent into the gully to extract a drink of sinking waters. Angry brays echo from another trail, hooves send sharp slate shards and rolling stones down the steep incline. A female warns her young of impending kicks and savage bites. I am gray and brown, and jumping out of the way, hiding behind a vegetal screen watching the invisible coming to the impossible along the desert floor. I am mother of foal and nursing protector of health, i find the grass, the rose and the squash in sad front yards of mistaken species. The door hinge squeaks between violent honking and fights, i set the quart jar on the porch floor.
Two chicks peep timidly from a box, hanging off the edge of cardboard, they squawk for feed, cracker crumbs and grassy meal, They live between need and purpose, a short span at best. I am egg, i am fowl, feather and nourishment, i am here, and night closes the screen of consciousness in a ring of darkness. I am the lonely animal, preserving, prolonging, from the shadow where the one coyote will sense me long after the equines have had their meal of amaranth and bunch grass, the heron will sleep in the lone cottonwood. And i will find comfort in the donkey snorting in a dream on the flank of his female and young genie by the tree.
In the early hour when all are asleep, i will know the soundless pad of coyote. The bat hung on her board, the heron curled in his twigs up high, and the chicks in their powder box cage dwelling, all secure in the day done and the next not quite ready.

Posted by nadine sellers at 11:44 AM No comments: A thrush sharpens its beak on an atriplex,
and suddenly, it is morning;
I push the sand with naked toes, and suddenly,
I am alive with need, waters beckon.
The thrush is in full song, the mountain in full rose,
children stir.
Hunger makes its usual rounds.
First the men grunt, then they sway toward the rocks,
shivering quietly in their long-johns and woolen socks,
they put their boots on in haste; no time to waste at dawn.
The grain ground up and boiled,
I prepare the gruel for the children
who groggily slither out of their bed-sacks,
one by soft one, vulnerable.
Coffee begins to boil on the makeshift grill.
I blow on my fingers in silent anticipation.
Gun propped up against the tent,
I watch for any movement, alert.
The men walk out of camp,
whispering position and angle of their prospective prey.
Now Sun is ready to return to hell in its quotidian chore,
to suffocate life down here by noon.
A last coyote silently lopes away
not far from the fading embers of our last fire.
A game quail marches by, in full breast and cocky plume,
to lead me away from its young.
At that moment I decide to let the carbine rest on its wooden pedestal,
a harsh token of my weakness.
Eye full of grits and fat;
Hunger subsides to conscience.
Let the men rip the air with their power in the mid-morning hush -
let them drag a heavy carcass home to the mining camp,
for me to butcher, for the children to grow.
One shot is all I hear:
Winter will be kinder
with a burro in the freezer this year.
------------------------------------------------
with sincere apologies to the animal kingdom for the humble distribution of protein for healthy childhood development.
photo credit: Calvin Jones


Posted by nadine sellers at 4:33 PM No comments: