see what happens when i am left alone with a pen on a dreary winter afternoon? 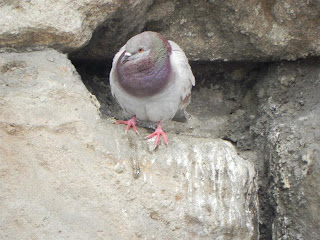 the photograph which spurred this one was borrowed from an excellent poet and artist, Michele Vassal Ring.

Tectonic cracks mar the social landscape, stretch across the global market, releasing noxious gases in common space. The ominous cumulus weighs down the public mind, I feel it all from this ledge, at the edge of a world I cannot claim.

Laws and opinions multiply like uncontrollable litters in the political arena, according to interest along a sclerotic divide dressed of fickle bi-partisan colors.

Disorganized religions cover the map to separate the unsuspecting or suffocate the dissenting; when each is searching for its own ultimate good.

Venus and Mars are touted as competitive in a futile sport; dissect, trisect or splinter may never override the proverbial Adam and Eve within.

Energy has become the new board game of the century, pitting winds against fossils, sun against atoms. Divide or provide cut along profit margins of the instant against long need.

Questions, questions on forms and applications for permit to live, permit to die, within reasons of ethnic lines when humanity would suffice sans segregating complications.

Food and water fights in the sterile halls of obfuscation rend the living process into despair for the multitudes. As biomes which could sustain are dissected for benefit and by pain.

Tectonic splits are groaning beneath the feet of the laden, and yet I see a sliver of light across the squall line of disparity, there, where unity means unadorned faith in all being.
Posted by nadine sellers at 2:27 PM No comments:

A book Review: The Fires of Waterland by Raymond Alexander Kukkee.

Review of Raymond Alexander Kukkee's book, The Fires of Waterland. 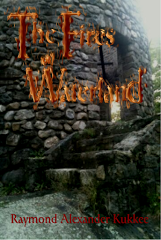 
Raymond Alexander Kukkee has broken into print at Redmund Productions, a mark of his talent and passion for fiction. In his novel, The Fires of Waterland, he has brought an entire range of universal concerns into full view. Honesty is served in doses of violent conditions in the boiling secrecy of buried poverty.


Set in mid century Canada, the suspenseful tale of family strife and cascading abuses reads as a serial film of great scope. Somewhere between memorable epics of the great depression and Dickensian classics, the story begins as charming details of the lush countryside “small plants domesticate undisciplined cracks in the delicate lacework of broken curbstones—mosses and meticulous ivies advance”, innocuous introductions of slow memories pouring from an old man's recollections of a seemingly simpler era.


Then, the reader begins to suspect there is a complete life bubbling from this authentic boyish voice; the all too common symptoms of a repressed society keeping its secrets much too close to home. Pages keep turning, pace keeps pulling the eye to the next event, the next reason, the last reaction. The theme rolls along the interstices of adjustment to painful condition, and unfairness of system. Trauma is experienced from within, “ he would shake his red jowls like a hound shaking off swamp water'”seen from a child's perspective.


R.A. Kukkee maintains moral principles amid sensual upheaval, vivid detail depicts crucial scenes that rock the steps to teenage revelations. No gratuitous hyperbole covers the sexual awakening of those involved “her skin was the color of almonds—skinned almonds are slippery when they are wet” No unnecessary profanity mars the text to remain accurate in the weight of each scene. The delicate balance of act and impact evokes the struggles of growing up, or growing old even in indelicate circumstances.


The Fires of Waterland encompasses timeless values in the scope of personal trauma. The fine mesh of relativity woven through each story, chapter by chapter, ties the complexity of being. In the person of Fletcher, it is easy to empathize with the protagonist, his surges of anger, his hunger for acceptance; and most of all his recollections of a loaded past.


Floyd is portrayed as a cranky old veteran, he surfaces with modest attitudes and wise sayings “if you have a soggy handshake, it shows you might be in possession of a puffball brain too”. His wife, well apronned in her mothering role, dispenses generous love in the strictures of the times.


Gender defined and place sensitive, the tale proceeds along the expectations of the fifties without undue romanticism. It scratches the thin surface of small town living and encroaching aspirations. The ever familiar want versus need, rich versus poor, all aspects are splayed by human dualities, human frailties.


Age is not just a specific number, R.A. Kukkee takes the reader through the process with increasing speed and intensity, toward the inevitable progress of unspent emotion and confusion. The language serves the wide range of subjects well. Pride and ' dare I say ' prejudice, mitigate post-war ethics, with adoption and stagnation in the fictional lives which feel all too real to this reader.


Raymond Alexander Kukkee is a prolific writer living in Canada's lush regions above the Great lakes.


He has been widely published in knowledge based venues. His passion for fiction is evident in the book The Fires of Waterland.
Available in e-book or print.
Posted by nadine sellers at 5:20 PM 2 comments: