A Taste of Hemlock by Michéle Vassal: Review

A taste of Hemlock by Michele Vassal: Review

A Taste of Hemlock, by Michéle Vassal: Salmon Press, November 2011,Ireland. Pages of passionate humanescence and a blue eye on the land; it touches the darkness moist and fertile beneath spare contemporary, yet, timeless verse. The author harnesses a wide range of sensual tools to gather continuum against tides of madness. Linguistic influences convey a perennial state of spirituality in reverent tones of cultured awareness.

Storms and stars scatter the static impermeable resolve of the writer. Throughout her poetry, she sows the emotional landscape and reaps insightful language. Michele Vassal accepts the responsibility of communicative arts, she remains ever true to her quest for refined expression. Never shy of truths discovered along pain and adventure in a crowded world replete with poets and musicians drumming their lives in a vacuum above the mass, Michele stands firmly within her sensual realm, refining a multi-dimensional artistry. Music claims her voice, rage or whisper.

Throughout defining imagery the reader may follow the curve of spiraling womanhood in reference to motherhood, daughters and lovers and by extension the connection to nature ever-present .

Aroma permeates sensory memory, culinary alchemy performs a mystical duty in conjured images of steaming “Khilii Couscous”. Total tactile involvement evident in the phrase.
“ and I rub with burning hands the steaming grain in argan oil, rolling it until it separates like seeds of sand between the fingers of the Sirocco”.
Ancient numeric significance deepens text in such focus
“and seven is the sacred number I fold in the stock fragranced with thirty six spices”.

MichéleVassal's poetry often follows the whims of weather and moods: In Under the Dog Star, an unforgiving sense of expectancy wells up strong and urgent.
“when
you sit at the edge of stillborn storms swollen and taut”.
To be sunk in persistent detail along the spare lines, unsolvable.
“anything can happen
and wine will sour on your tongue”
Taste co-mingling with immutable truth.

Helix plunges the partaker into visceral integrity, a bold knowledge within the intimate spectrum of selfhood in sketches of the universal feminine.
“ pulsing helicoidal dreams”


Sacrifices” alludes to human plight; I hear the cries of Medea echo above dry wars in foreign lands, and mothers alternately bemoaning or cursing in a litany of helplessness. No, the author does not impart anything but strength and outrage in context. The reader derives agonizing travail along the tragic path.

Blood spills in the recollection of layers of relationships, conflicts and wars and yet, mystical strength persists in texture, in the resurgence of attention to living detail of a microcosm of animal cognizance, of herbal acquaintance; this long knowledge one acquire through “little deaths” and elusive peace.

An inebriating feast of repetitive words, or alliterations and cascading sounds envelops the mind with hypnotic momentum. Then the next page takes the lead to sensory immersion on an exotic revival of adventurous forays in rare climates. The Dancers of Ain Taya trace such a tale in ethereal quality. Train to Brittany meanders through vicarious presence.

The title poem “ a Taste for Hemlock”; a flawless sequence of short verse. It distills the complex, the communal drive to inevitable death at the end of a systemic melancholy thread.

“defining desire and death” a conceptual, movable verse, disperses its acquired wisdom beyond the dull ache of long pain, above the throb of ritualistic grief. The verdant background of the book cover, the glistening cerulean undertones understate pure, passionate, pleasure. 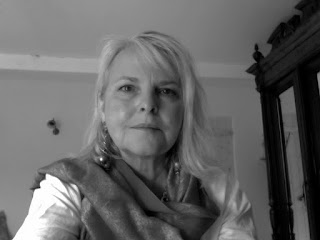 Posted by nadine sellers at 2:18 AM